What Are The Chances Here? Really? Amazing!!! 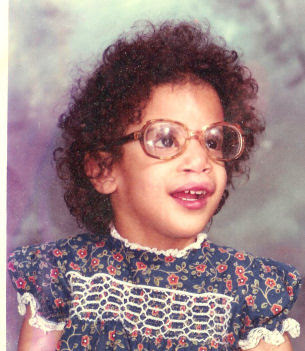 For those of you who don't believe in the Law of Attraction, or for that matter, in miracles...Consider this:

The photo here is of Amanda, our second adoption. She was born in 1977 to a woman living in an institution since age 4, who had contractures in every joint in her body and was profoundly mentally handicapped, and a man who worked at the place and took advantage of her.

Nobody knew that the woman was pregnant until she was ready to give birth, and all that time Amanda was exposed to massive amounts of anti seizure drugs and others. We got her when she was about a month old.

She was born with a bilateral cleft lip and her little feet were so deformed that they were stuck up against her legs. Those were serial casted down and she learned to walk, and the cleft lip was repaired early on.

But those were the least of her problems. This little girl cried and screamed almost all day and night. And she constantly punched herself in the chin and hit her chin on her shoulder and bit herself. Imagine spending your days with a child who cannot be calmed down, and who constantly hurt herself.

We loved her and worked with her until she was eight years old, when she became even more self abusive and I had her Baker Acted to the hospital. They moved her to a major psychiatric hospital in town with a children's wing. No matter what they did she never did get better.

When her time wore out at that place we had her placed in another program in town, where she did a little better but not very much. They couldn't keep her in bed, either. Nobody could. And the self abuse was frightful and bloody.

A painful decision was made to place her in a group home. It took forever to find one in the state that would take her, and it was clear on the other side of the state. So I sadly took my little girl on a plane ride that I thought would never end. It snowed and they couldn't land in the right airport, so we had to take a bus ride for about three hours to get to the home. She cried and screamed the whole time, but that wasn't unusual.

Just about every week I'd get a phone call about her stuffing a mathchbook up her nose or something and having to be taken to the ER, or biting herself somewhere and trip to ER, or banging her head so hard that she had to go to the ER.

We then moved south, and the group home threw her out, They couldn't take the risk anymore. She was the most severely self abusive kid they had ever had. It took a while to find another group home for her in our new state, and it was two counties away.

Over the past 20 years she had been moved from one group home to another. We could not get up to see her often because of the size of our family here and the medical conditions that our kids had. Caseworkers changed, the group home owner I had given legal guardianship to, so they didn't have to call me for every little thing, closed down and she dropped her guardianship.

Eventually she was lost to us. We had no idea where she was, and nobody else did either. Our names seemed to have been dropped into a black hole.

I was looking at pictures of her about a week ago and hoping she was OK. And if you read this blog you know that I am a firm believer in The Secret and the law of attraction.

Yesterday, my daughter who works in a local gastroenterologist's office called me and said, "You'll never believe who is here. It's Amanda!"

Her current group home, some 2-3 hours away, had brought her in for an evaluation. They couldn't find a medicaid provider in their county that would take her, so the lady thought, "I bet I an find one in (our city.) There are several medicaid gastro offices here, and a some in the county above us. But she picked THIS ONE about 20 minutes from our home. The one where Amanda's sister was working...

My husband and I quickly got in the car to go see her. Amazing! She's 31 now and much the same. The staff had been told that she had no relatives. I gave her Amanda's birthdate, and told her about the finger Amanda had chewed off as a child on a schoolbus. We had a wonderful reunion! Amanda is now totally blind. We exchanged phone number and addresses. They were delighted to find parents they could call for permission to admit her or treat her.

So what do you think ARE the chances of this happening? Two counties away, the staff had no idea she had any family here-and I mean 20 minutes away from the office, and that her sister would be working there and recognize her???

This is just another wonderful incident in my journey through the Law of Attraction, and the love of God.

Anything is possible. Anything. Get the movie-The Secret-it's way better than the book. Then take it further with Joe Vitale's book "The Attractor Factor." and "The Key."
Posted by Dusty Hart at 10:22 AM

Wow, what a miracle from God. I'm so happy you got into contact with her again.