I do other thing.s besides being a wife and mom. One of my passions is digital art. Here's a quick sample of some of my older work:

OK, I realize that the term "common sense" and "foster care simply have no business being located anywhere near each other. But I have some ideas about the system.

Cindy in her post about something a friend of hers wrote touches on this. Her friend, like most of us large adoptive family moms, had been through the CPS nightmare and stated that unless you had the money to hire a "big bully attorney" you had no chance to fight CPS. True. But that isn't necessarily what this blog post is about.

Twice CPS has threatened to take our kids for damage to the house done by those same kids, and the lack of money/time to fix those things. Flooring ripped up, holes in the walls, etc. If you're reading this, you know what I mean. This put me in a unique spot and had gotten me thinking.

If they had been able to remove my kids, the emotional damage done to them would have been extraordinary. So much so that any foster or future adoptive family would have had one H*LL of a time managing them while they grieved, and they would grieve forever. The future of these kids would have been changed from rosy to untenable for young fragile personalities, all of whom are bonded well, because in the past 20 years we only adopted infants with Down Syndrome or Spina Bifida. Oh, and a superpremie crack baby got in there too. Breaking that bond with us would have destroyed them.

How much better would it be if children were left in their home and round the clock supervision were provided in home? A person to just BE THERE, to help out and to make suggestions. To teach parenting, if that needed to be done.

The kids wouldn't have to leave the parents they love. They would be safe and their lives wouldn't be abruptly changed to live with strangers. Life would go on without damage to the children's psyches.

Now,I realize that some parents would STILL screw up and some kids would still be removed, but if it saved the largest part of threatened children, then it would be a success. I mean, if the supervising lady said, hey that kitchen isn't safe or healthy, please clean it up (with the implied thought 'I can take your kids if you don't') surely a parent who loved their children would do it.

You say, it's too expensive? Oh no it isn't. Foster care and all that entails is way more expensive. And then there are the psychiatric bills that will always go along with a child removed from his own home. This plan would do away with the residential treament often needed with damaged children. No foster care, fewer damaged children.

Now this in home round the clock services would only work if the children were also granted access to medicaid, and money would be there to hospitalize severely disturbed children in the home.

A good solution all around, I think. Kids with a future, versus kids with nothing but torment in their future.
Posted by Dusty Hart at 1:31 PM 4 comments: Links to this post 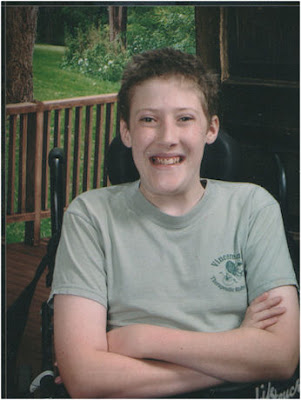 So it's what, three weeks into the school year? Yesterday the county supervising school nurse was called in to look at Jay, who is 16 and has spina bifida and uses a wheelchair. He also has a vesicostomy, which is simply a hole directly into his bladder. No stoma, just a hole that serves as a release valve so that his urine doesn't back up into his kidneys.

He had loose stools and the teacher was concerned. So the county nurse told us she wanted us to take him to the UROLOGIST right away as he "might have a blockage."

Now if you're paying attention you'll see the stupidity here. Why on earth would I take the kid to a bladder and kidney doctor for loose stools?

So we asked if they wanted him taken home and they said no. HUH? They send kids home if they SNIFF.

And just now I get a call from the PHYSICAL THERAPIST wanting to know if we'd taken him to the urologist. I said no and why would I take a kid with loose stools to a urologist? She was snippy and said, well you have a nice day... And I see where this is going. Pretty soon the CPS people will be at my door.

My legal plan had better be in place by now...

(OK, for those who asked goto megamom's site and scroll down on the right and you'll see the link for the legal plan. It's cheap and provides you with a hotline to call when CPS is on your doorstep and get advice from am attorney who understands how these things work. Priceless)
Posted by Dusty Hart at 10:12 AM 1 comment: Links to this post