We Didn't Walk Away

Large adoptive families often take a bad rap. We get reported to child protective services, most of us, once or twice a year for really stupid things, and for vindictive reasons. It's hurtful. It scares the cr*p out of our kids, and sometimes it totally destroys a family.

People think we do what we do because we have some ulterior motive. That we're secret pedophiles, or that we do it for the money (Yeah, right...)

Or we do it for the glory. (What glory is there standing up in front of a judge? or being put down behind our backs by people we thought were our friends and family?)

But we all have one thing in common that we need to remember in those hard times.

We saw a problem, and we didn't walk away.

This short video, made by a guy with his cell phone camera, got me to thinking about this. It's called "Mankind Is No Island."

Things Scarier Than a Clown 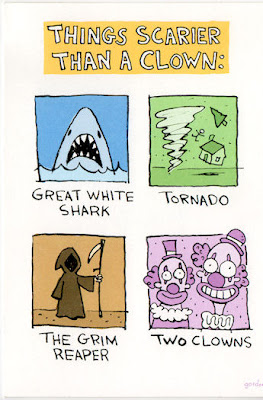 I finally got this birthday card scanned. It was given to me by my daughter, Wendy, who being my oldest child, knows me better than any of my other kids. Inside the card it says "May you enjoy a clown-free birthday."

For some reason that nobody in the family can pin-point, my two sisters and I have always feared clowns. She also gave me another card that was beautiful and thoughtful. Some of my kids always give me two cards-a funny one and one they spend about an hour looking for.

Me, on the other hand, I never remember to get cards for any occasion. I'm trying to change that, though.
Posted by Dusty Hart at 12:05 PM No comments: Links to this post 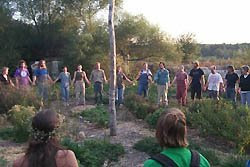 How would you like to live in a home that got it's power from wind and the sun, eat locally grown produce, enjoy the countryside and build a community, in the real sense of the word?

First off, you might think of the communes of the 1960s and 70s, but this is something quite different.

At Dancing Rabbit Eco Village a group of about 40 individuals have settled to live off the grid in a sustainable village where people build their own homes, eat local produce and grow their own food, are guardians of the land.

Read about it HERE
Posted by Dusty Hart at 10:26 AM No comments: Links to this post

If you recommend or review products on your blog and receive monetary compensation from this activity, you must disclose that you are making money from it, or that you are an affiliate for that product if this law passes.

Why they are targeting the so called "Mommy blogs" I don't know.

So...after waiting several years for the money to get new glasses for myself, I was psyched about going to Walmart to pick them up yesterday morning. My husband had previously loaded up the big van and had taken all the kids off to their riding lessons at the therapeutic riding center.

Realizing my phone was dead I plugged it in to recharge and then I drove to Walmart and picked up my new glasses. YAY! While I was there I found two nightgowns for myself, each costing $8. I was having a great time out by myself, but I needed to get home to feed the dogs.

Almost as soon as I got home the phone rang (not my cell-the other phone.) It was my husband and all he said was "I need your assistance." I assumed I needed to talk Jeremy down from something, but he said no, just to meet him just south of Orange Grove Blvd.

Of course I'm thinking CAR WRECK. He had refused to elaborate, just said to come. So I got back in the little van and drove down to Orange Grove. The big van was sitting on the side of the road with blinkers on. I pulled off and got out of the car and then I saw Jeremy sitting on the sidewalk, my husband standing beside him and a police officer talking on a radio.

I learn that Jeremy had been acting up in the van and had thrown one of his riding boots out of the car. So Dad had to stop the car to get it back, when Jeremy opened the car door and plopped down on the sidewalk and refused to move.

So I don't know WHAT the cop was thinking. Probably, Is this white guy trying to kidnap this African American kid? So, anyway, I knelt down besiude Jeremy and began the sweet talk that sometimes is the only thing that makes him comply after he blows up. Then two more police cars pull up. I thinking NICE WORK, JER!

I finally get him to agree to get up and come home with me in the little van. So he stands up and says, with a final effort at defiance, that he's going home with Dad in the big van. She he gets in and heads home, leaving me with the police officer.

I tell him that Jeremy is severely behavior disordered and attends the county's highest level school for MR kids with severe behavior problems. He says, yeah your husband told me.

So I get in the car and come home, where it's as if nothing had ever happened with the boy. He's fine. Like a switch flipping off.

The rest of the day is uneventful. It could have been worse. In fact HAS been worse at times. Just our life on a different planet from most parents'.
Posted by Dusty Hart at 2:40 PM No comments: Links to this post

Better Homes And Gardens NOT

Last night before bed I was reading the new issue of Better Homes and Gardens. Inside was a story about a young couple and their three perfect little blond headed girls and how they had decorated their home.

The wife, Ashley, was quoted as saying "There's really nothing here that the kids could destroy."

This sent me off on a laughing spree. You just don't have the right kind of kids, Ashley. Let me tell you what 9 mentally disabled kids can do with your home.

How about those three pretty round metal legged glass table you use in place of a coffee table? My kids would break the glass in a day, and then one or two of them would pick them up and throw them just for fun.

How about the white slipcovers on your sofa and loveseat? In my house we'd have a LOT of trouble just keeping them ON the furniture, and anyway, I'd have to remove them at least twice a week to wash them. Not worth the effort. Better to have dark leather furniture that doesn't show dirt.

And what's with those wicker and rattan dining room chairs? In a large adoptive family they wouldn't have a chance! Someone would pick at them until a big hole resulted, and then they'd move on to the next chair. That's why we have cheap metal dining room chairs (And yet they get broken, as when knocked over the wood seats get knocked off.)

And Ashley, those pretty ceramic pieces with greenery in them on the mantel? Come on. No way. And you pretty antique looking persian area rug on top of you larger sisal carpet...I have a kid who would find a thread in that Persian thing and keep at it until the whole rug was threadbare. And natural fiber in a carpet? That surely wouldn't stand up to spills.

Those two huge upside down glass encased candle chandeliers? I groan at the thought of cleaning that glass up after a month here. Then I look at the walls, not one hole, not one broken window waiting for the money to get it repaired.

And yet, I wouldn't trade my unstylishly unfurnished and constanly in need of repair home with Ashley's for a mint of money. Because my home has something hers doesn't. MY KIDS!
Posted by Dusty Hart at 8:35 AM 1 comment: Links to this post