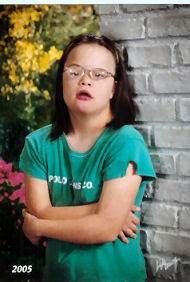 Robin is now 17. She has Down Syndrome and is the sweetest, happiest girl you'll find.

When she was little she was like all other kids with Downs. She played with toys and sang songs and played with others. As the years have progressed, due to her brain damage from being a premie, she has gone downhill. Today, unless someone drags her somewhere she'd just as soon lay on the couch with her Elmo doll and watch tv or not watch tv. She doesn't talk much anymore.

The only toy she like is that darned old Elmo. It is missing both arms and one leg and is about as ragged as a stuffed animal can get. We have to sneak it away when she's at school to wash it, as it gets so yucky. Other than horseback riding, which she adores, there is no substitute for Elmo.

This Christmas I found a perfect new condition copy of that old Elmo on ebay. They haven't made this doll for years, so I jumped on the chance and bought it for her gift. I was excited.

On Christmas morning Robin opened it and she recognized it, but just put it aside and went back to playing with old Elmo.

We tried taking away the old guy, so all she had was new elmo. But that just didn't work. She made sure that new elmo was in it's place on her bedroom shelf, but he didn't come outof the bedroom. So I did some surgery and took old elmo's head off and sewed it onto new elmo's body. Robin looked at it like it was an abomination. A frankenstein monster.

So a couple weeks ago I put old elmo together again and gave it back to her. It took a couple days for her to accept him again, but now all is right with her world.

I was thinking about it this morning. I guess it's kinda like if I woke up on Christmas morning and my adult kids presented me with a younger 25 year old version of my husband..New Daddy. He'd look just like I remembered him, but he wouldn't be the man I'd spent more than 40 years with. I'd put him on a shelf in the bedroom, too, because though I still loved New Daddy, it would be Old Daddy that I craved.

Old Daddy (and I apologize for that, Sweetheart) and Old Elmo just can't be replaced with a younger version.
Posted by Dusty Hart at 11:18 AM