Will Said A Five Word Sentence! 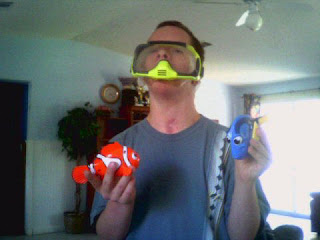 This is Will, who is 20 and has Down Syndrome. Not one of my higher functioning kids, he rarely says anything that is understandable, and then only one or two words connected.

Today he said "Turn that down RIGHT NOW!" He was pointing toward Jeremy's room, so I guess it was the tv in there he was complaining about. Now nobody else would have understood him but me or my husband, and then there would be a good chance neither of us would either, so this was unprecedented. Our lack of understanding what he says is so frustrating for him, and he only know a few signs.

I'm sure that's a sentence that he's heard around here a LOT.

Will was born early at 5 pounds by C-section, because his stomach wasn't connected to his intestines, causing extreme fluid buildup in his birth mom's uterus. He had surgery to correct that the day after he was born, but that went horribly wrong and he ended up with necrotic intestines that mostly had to be removed (all but about 6 inches.)

Three months later, after two more hospitals and several operations and near death experiences, Will came home. Not long after that his airway closed up due to scarring from all the intubations, and he had to have a tacheotomy. Four years after about 50 surgical procedures and attempts at three different hospitals, Will finally got rid of the trache.

He's a neat guy, but because he is a man sized three year old, he is sometimes hard to handle.

But he said a five word sentence today!
Posted by Dusty Hart at 2:19 PM