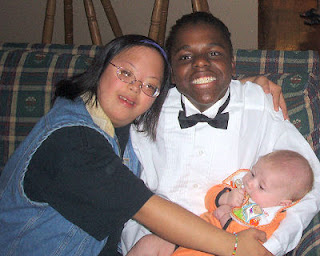 This photo is of Jennifer, Danielle and a friend's baby. Jennifer is 22 and enjoys being a responsible adult now. That includes going to work at the Hab Center and bringing home a paycheck every two weeks. And, of course putting the paycheck in the bank and buying things for herself.

Last night, quite a while after dinner, Jen decided on her own to run a second load of dishes for the day. Neither of us noticed this. Apparently she discovered that we were out of dishwasher detergent, so, priding herself on her independence, she improvised and used dishwashing liquid.

A while later my husband went into the kitchen and was faced with a wall of soap suds. This kind of stuff doesn't faze us or get us upset. It's such a minor thing in the scale of problems we face every day. He got out the wet-dry vacuum, but it, too overflowed with bubbles.

Anyway, this AM we can put the dishwasher back together again and everything is dry.

When Matt and Jen were little we called them "the destructo twins." Everything they touched they broke.Up until they were about 8 or so, that was very true. And, having parented nine kids with DS from birth, I think that attribute runs across the board. They delight in pulling up vinyl flooring, taking a loose thread from a carpet and pulling it down to the backing. Banging holes in the wall, and then proceeding to enlarge them bit by bit. Mangling toys.

But when they hit middle school age, all that is usually over. I say usually, because there is always an exception.

My Jeremy, who is 14, is STILL a destructo kid. For three years he's gotten a new cd player/radio for Christmas, and within a month each time the thing has been broken. I told him he wasn't getting a new one this year. (But that's OK, as he really really wants one of those spiderman gloves that shoots silly string webs.)

He also recently kicked holes in his hollow core bedroom door, and then took it apart piece by piece, until there was nothing left. Somehow I don't think things are going to change with this young'un. He's also my only real runner. Gotta watch him 24/7.

Gotta love them all...