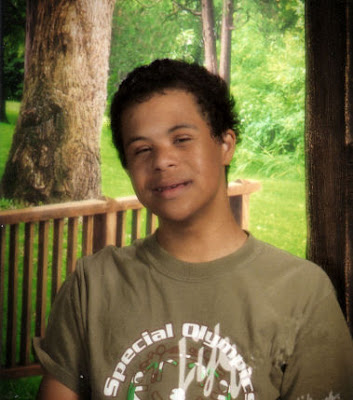 Yesterday my husband and I took Jeremy to the shrink for the first time. His behavior over the three weeks between real school and summer school made us face the facts. He needed to be back on meds.

There should have been a security camera in the waiting room. He displayed all his ADHD symptoms quite well, except, of course, for the breaking windows, putting holes in the wall, stealing things and taunting his siblings. He was all over the place. Luckily for most of that time we were to only occupants of the room.

Then a young couple came in and sat opposite us and sat reading a magazine together. Jeremy, of course, goes over to them and puts out his hand to the girl and says, "Hi, I'm Jeremy."

She says hello and then Jeremy says "you're cute" and then stands there winking his eye about ten times. I guess that's supposed to be a big attraction factor.

The he comes back and sits down and tells the young man that he's sending him home. Then he tells the girl to meet him at ten o'clock. Actually, he says, "Girlfriend, meet me at 10 o'clock."

He didn't tell her he was going to marry her, like he normally does with pretty girls, but he did kiss her hand. The young couple took it all with good sport. The kid can crack me up.

The shrink, however, is a medicaid flunky shrink. Have you noticed that the psychiatrists that take medicaid are nothing more than pill pushers? This guy talked to me for a while without Jeremy, then brought the kid in and talked to him and prescribed two meds. One of which is a controlled substance. which means two things: 1. medicaid will fight paying for it and 2. we'll have to make the trek into town each month to pick up am RX form, because there are never any refills on these drugs.

It's probably going to take months before we can get him approved for this one drug, and then every couple months they will stop paying for it, and we'll have to fight for it again. I tried to talk him into Strattera, which worked OK for him years ago, AND isn't a controlled substance. Yes we'd stil have to fight medicaid to get it, but at least there can be refills. But, no...this new drug will supposedly work much better than Strattera.

I think all medicaid shrinks get a kickback from the drug companies when they prescribe a new drug. That's all these guys do. Kid walks in, parent says ADHD, he says to himself, "Which ADHD drug did the pretty drug rep in the gray suit, high heels, and black suitcase bring to his attention yesterday?"

There's no real concern for the child. It's like a revolving door. Kid in with ADHD, Kid out with the first drug that comes to mind. NEXT!

Actually I think the government could save money on their medicaid patients with a simple vending machine. You punch in your kid's medicaid number, select from a variety of possible mental conditions that you suspect your child has and press a button and out comes your script. That's all the medicaid shrink does anyway. Let's eliminate the middle man.

We had an excellent shrink lady for ab out a year. She actually spent a LOT of time discussing Will's problems and very carefully made an RX plan for him that actually works pretty well. Not just the top drug being newly sold right now, but the tried and true meds that she knew would fit Will's case. She was wonderful, and she really cared.

She stopped taking medicaid when they never paid her. I miss her,
Posted by Dusty Hart at 11:14 AM