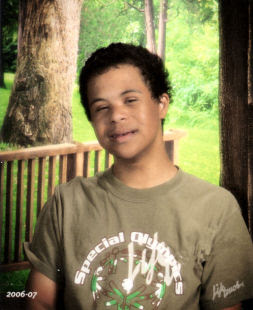 Well...DH had the day off today, so thought it might be productive. Thinking maybe if we worked together something might get done here.

But Robin stayed home with a cold. Will refused to go to school and Jeremy's school called and asked for us to pick him up. He was sent home on Friday with a cold, but over the weekend it cleared up. So I think he's pulling their collective leg at school this morning.

The thing about Jeremy's school is that it is 45 minutes away. So that's an hour and a half driving time. There goes the day.

Jeremy attends a county run special class for mentally retarded kids with severe behavior programs. (yeah I know, the term is politically incorrect) Jeremy has Down Syndrome and is 14 years old. He has been attending this marvelous class for a year and a half now. It has made all the difference in the world for him.

Before he got in this specialized class he was a holy terror for any teacher. Kicking, hitting, running away from teachers, getting into cars in the parking lot, smearing poo in the bathrooms.

You might think that this kid must be profoundly MR. He's not. In fact of all my DS kids, and I have a lot of them, Jeremy is THE highest functioning. He's smart. Extremely inquisitive. But he is also super impulsive, and super sneaky.

He's not RAD either. I know Rad..this isn't it. I'm starting to think that he must have some degree of fetal alchohol syndrome or affect. But this class has helped him so much, even at home.

Anyway, this class is a short term program. This is his second and last year. He is doing so well there that they want to release him back to the regular school system. I completely know what will happen. He'll fall apart. I'm sure of it. At least I have a few more months of relative content here.
Posted by Dusty Hart at 12:18 PM