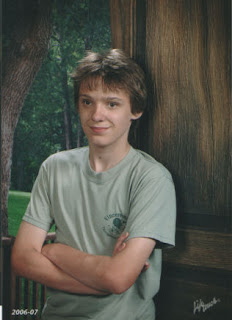 When you adopt kids with special needs, you have to accept that there WILL be medical emergencies, but it never gets any easier. This morning Dad tried to get Ross up for school, but he was seizing and had a high fever.

He was totally unresponsive, so I called 911 and the ambulance got him to the hospital. Now, he has spina bifida and a vp shunt, but he's never in his life had anything other than petit mal seizures. This was scary. He's 15 and such a great kid.

Of course this freaked out all his siblings, because in 2003 our 13 yr old son died at home and we did CPR until the ambulance came and took him to the hsopital where he was declared dead. So, of course, all my kids having developmental delays, they equate hospital with death.

Ross is still out of it tonight, but you can get one or two words out of him, but still not much sense. The neurosurgeon is coming in in the morning. Say a prayer for my sweet boy.
Posted by Dusty Hart at 10:47 PM

My first time here as well. Just wanted you to know that I'm praying all goes well and that R. gets well soonest - and completely. Hugs!!!