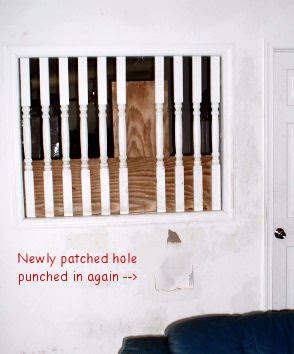 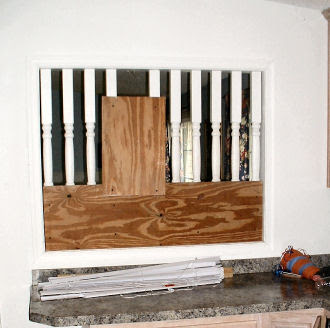 I have two boys who seem to make housebreaking their life's work. I don't mean breaking into houses, I mean Breaking Apart Houses. This one in particular.

Now, many large adoptive families have this very problem. None of us has a picture perfect home. But then we're not picture perfect families. I've had case workers who walked into my home and said that it wasn't homey enough. That I needed end tables and lamps and curtains at all the window and pictures on the walls. I'd go out and get all those things only to have the kids destroy each one in just a few weeks.

The most we can have in our living room is a leather sofa, a leather loveseat and a leather recliner. Before we invested in the leather we had to go to the thrift store and buy a whole new sofa and loveseat and chair just about every month. It was good that I could buy the whole set for $100, though. But they were not very pretty.

We've had framed prints on the wall, well, screwed into the wall, and some of them have stayed up a long time. In particular the framed photograph of our late son, Ethan, which seems to be revered enough to stay put. It did have a mishap when Will through a skate at a window and missed.

On Thursday night Jeremy was caught with contraband food from the kitchen and then went on a rampage. Luckily there isn't much left for him to break. I mean he's broken his own bedroom window, and ripped his hollow core door to shreads, so that now he has no door. He's ripped the blinds from his window so often that I think they won't go back up there. He tore apart his dresses, so now he has a plastic basket for his clothing. He has holes in the walls everywhere in there, so he went looking for something to destroy.

He ripped the toilet seat off the toilet in the playroom bathroom, breaking the part where it attaches to the toilet. That poor toilet. Just the day before Will had been in one of his throw everything moods and picked up the toilet tank lid and threw it. Dad patched it together with superglue. It looks sad.

The difference between Will (almost 21, down syndrome) and Jeremy (15, down syndrome) is that Will does these things on a lark. He happily does things. He doesn't do stuff when he's angry. He sits and cries or yells. Jeremy is sneaky and takes things, and then when caught he goes on a rampage and destroys stuff. Jeremy is much smarter than WIll.

We used to have a pass through between the family room and the kitchen (what was I thinking when I designed this house. Kids constantly crawled over it to get into food. We've had a wall there for many years. Now we have a window there, but it has posts up and down the opening. Jeremy figures out how to maneuver his arm so that he could each the doorknob and get into the kitchen, so we put plywood on those posts as far as he might possibly reach. So he busted out one of the posts. Dad fixed it with tape and reinstalled it, but Jeremy knocked it out again and crawled through the opening (must have squeezed real tight) and got in to steal food. And when caught went on another rampage.

So Dad put another piece of plywood over that hole, and the next thing you know Jeremy is taking a metal dining chair and ramming the top of it into the plywood.

Did I mention that he broke his box springs and his brass headboard? Or that he has broken every set of rabbit ears we've ever bought?

Will breaks things too, but happily so. He has broken the legs off of the foosball game (one time Jeremy helped.) He ripped off the skirting from the playroom couch. He rips up vinyl flooring like it's the funniest thing in the world. But it's different. It's not from rage, but something fun to do.

I dream of a beautifully decorated home, but the reality is that until the kids are all grown and out on their own (AND THEY WILL BE SOMEDAY- I SWEAR IT!) and my husband and I have a nice little regular four bedroom on a pretty lot perfectly landscaped with flowering trees and end tables, lamps and framed art and, maybe, do I dare think it? Carpets...

My grandsons ask their parents, not if they are going to grandma's house. They ask, "Are we going to the Broken House?"

I know my kids do not have the same level of disability that yours do and yet I can feel some of your pain. We have holes all over the place and the couches are all torn up. This has been the topic of discussion lately. Is there any point in patching walls and sewing up the couches if they will simply rip them up again?
-jen

Yes, Jen there is a point. If you don't you can/will get charged with neglect.

We've had our share of home wreckers too. My sister's 9 year old has broken doors, cabinets, screens, put holes in walls. We have a hole in our front door where he ran at it with a long pole. They have scratched words and initials into the paint on my car. He and his brother pee on each other's beds and put the other kids' clothes in the toilet. We did have a social worker with our agency tell us to patch up all the holes so he wasn't being shamed. She even tried to give us tips on how to patch the front door which really needs to be replaced not patched. But, our house does look pretty nice right now all things considered. We used to take crisis placements and respite kids in houses rented at at campground. The houses were not very nice to begin with and the kids would drop trash everywhere, pick the paint of the walls, color on the furniture, and break (or steal) everything in sight. And what is out about wiping boogers all of the place? Yeeee---uck.